Dr. Johnson’s House, Samuel Johnson is perhaps most famous for his publication of A Dictionary of the English Language in 1755, a watershed moment in the history of the English language, and fans of the famous lexicographer and writer can visit his house not 500 feet from Ye Olde Cheshire Cheese. Johnson lived at this house on 17 Gough Square for 11 years, during which time he compiled his Dictionary, and today visitors can view first printings of Johnson’s work and his personal pink tea set. Famous for his sociable disposition, Johnson was known for being a great host and many famous writers passed through here; some of their memorabilia is on display in the house today. 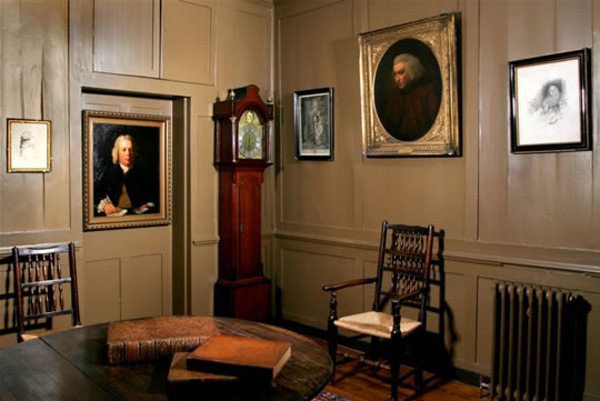 Bloomsbury, A neighborhood steeped in literary history, Bloomsbury is an easy place to while away an afternoon exploring its quiet streets. The Bloomsbury Square garden was a meeting place for writers during the 1920s and ’30s known as the Bloomsbury Group, a highly influential group of writers that counted Virginia Woolf, John Maynard Keynes, and E.M. Forster as members. The British Museum, the former home of the British Library, is nearby, and W.B. Yeats, Charles Dickens, T.S. Eliot, and Bram Stoker all lived in the area at one point. 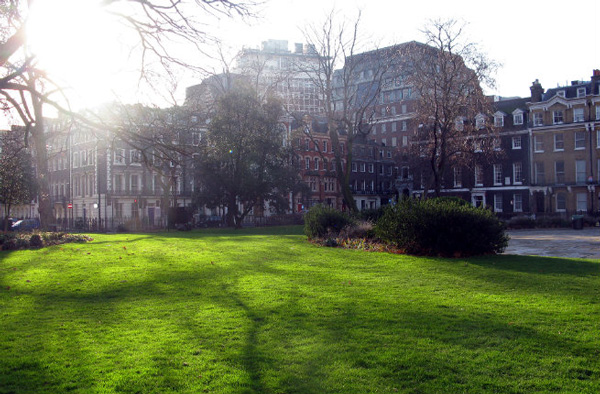 Ye Olde Cheshire Cheese, With a list long list of illustrious literary regulars, Ye Olde Cheshire Cheese (145 Fleet Street) is a must-see for any literature fan passing through the city. Dr. Samuel Johnson moved next door to the pub in 1748 (though there is, in fact, no evidence of him ever visiting), but Mark Twain, Alfred Tennyson, Sir Arthur Conan Doyle, William Makepeace Thackerary, G.K. Chesterton, W.B. Yeats, Voltaire, James Boswell, and Ben Jonson are all said to have passed through at one point, if not attended regularly; Dickens’ even alluded to it in A Tale of Two Cities. This rickety Fleet Street pub is still a great place to grab a pint and relax in the historic atmosphere. 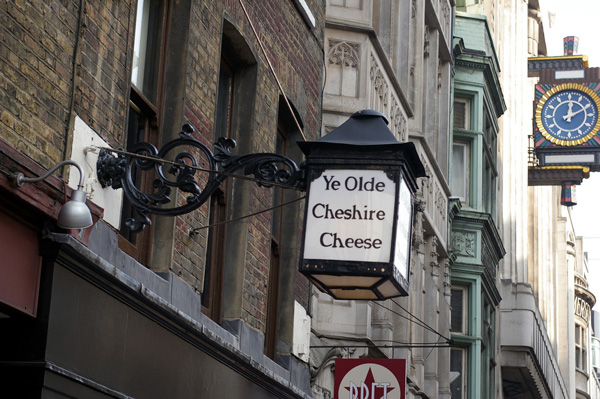 The Old Curiosity Shop, Built from the recycled wood of old ships, The Old Curiosity Shop (13-14 Portsmouth Street) is one of a select group of places in London that can say it survived both the Great Fire of 1666 and aerial bombing during World War II. The 16th-century shop can still be found near the London School of Economics and while the relationship between this particular store and Dickens’ The Old Curiosity Shop is unclear, the London landmark is considered by many to be the inspiration for the novel with its tilting ceilings, wobbly floorboards, and creaking staircase. Dickens lived in the Bloomsbury area near this shop and is said to have visited on multiple occasions. Stop in for a bit of history or to pick up a pair of shoes. 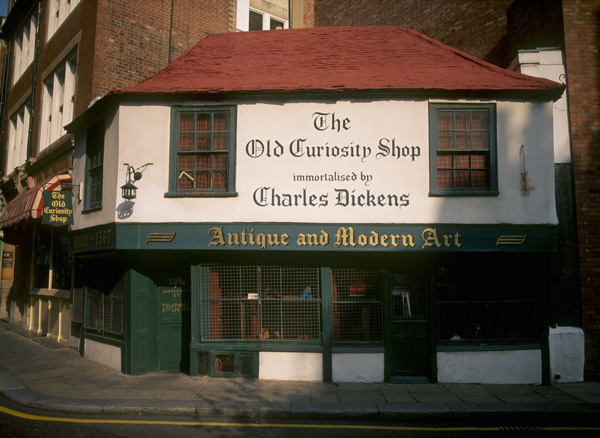 Highgate Cemetery, This 37-acre cemetery in London was created in 1839 as one of the “Magnificent Seven” cemeteries built to alleviate the burden on cemeteries within the city, and Highgate became one of the most sought-after plots in Victorian London. Amidst the lavish catacombs, chapels, and Egyptian-style tombs, you can view the graves of Karl Marx, Henry Gray (author of Gray’s Anatomy), and George Elliot, as well as many of Charles Dickens’ family members and several prominent English actors. The cemetery has been referenced in several modern films, TV shows, and novels, and gained prominence in the 1970s due to rumored supernatural activity on the premises. Note that access to the West Cemetery is only allowed on an accompanied tour. 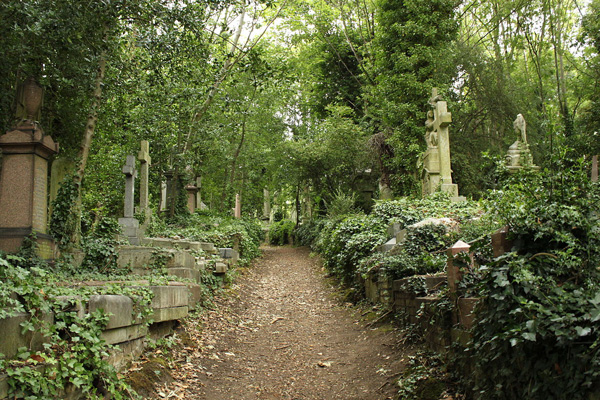 Fitzroy Tavern, A pub so famous it gave the London neighborhood its name (Fitzrovia), the Fitzroy Tavern (16 Charlotte Street) was once a favorite hangout of George Orwell, George Bernard Shaw, and Richard Attenborough. Legend has it that Welsh poet Dylan Thomas used to give out poetry written on beer mats to any woman who asked while drinking here. Pictures on the walls honor past regulars at the Fitzroy and while the crowd today is less literary than during the mid-20th century, the locals still lend this pub an authentic vibe. 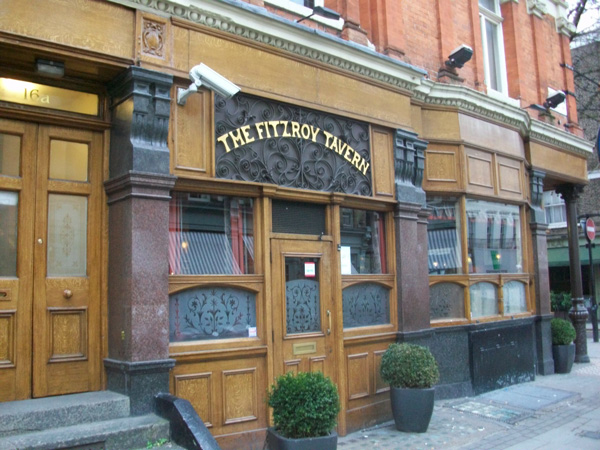 Platform 9 ¾, King’s Cross Station, For something with a little more whimsy, take the Tube to the bustling King’s Cross Station and look for the famous platform to board the Hogwarts Express. Follow signs for platform 9 and you’ll see the trolley disappearing into the wall off to the side (there is a roped queue and an attendant there almost all the time, so it will be hard to miss). After you take a picture with a Hogwarts scarf of your choice, head to the gift shop around the corner to stock up on Harry Potter souvenirs and trinkets. 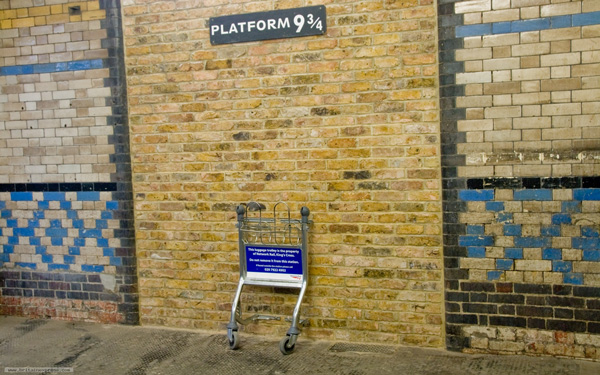 Charles Dickens Museum, Like Keats and his Hampstead residence, Dickens only lived in this house on Doughty Street for two years, but as the site where he penned Oliver Twist and Nicholas Nickelby, this spot in Holborn is worth visiting. When plans to demolish the house were drawn up in 1923, the Dickens Fellowship took over the site and turned it into a museum showcasing a collection of Dickens’ memorabilia, including paintings, manuscripts, furniture, and other items that belonged to the author. You can tour the museum at your own pace or sign up for one of the Costumed Tours on the third Saturday of every month, in which a period-clad Dickens’ housemaid gives you a tour of the residence. 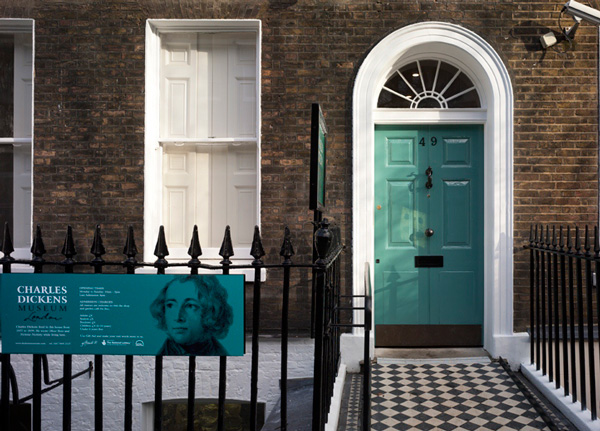 Poets’ Corner, Westminster Abbey, The list of famous people interred in Westminster Abbey is lengthy, to put it mildly, and Poets’ Corner in the South Transept serves as a kind of literary hall of fame. Geoffrey Chaucer’s tomb was placed here in 1556 as a kind of happy accident (he was recognized for his service as Clerk of Works, not as an author) that created Poets’ Corner, which has since served as a memorial to Britain’s greatest cultural contributors. Henry Francis Clay, Charles Dickens, Thomas Hardy, Rudyard Kipling, Laurence Olivier, Edmund Spenser, and Alfred Tennyson are all interred here, and there are also several monuments commemorating famous writers whose remains are elsewhere, most notably Shakespeare, who is buried in Stratford-upon-Avon. 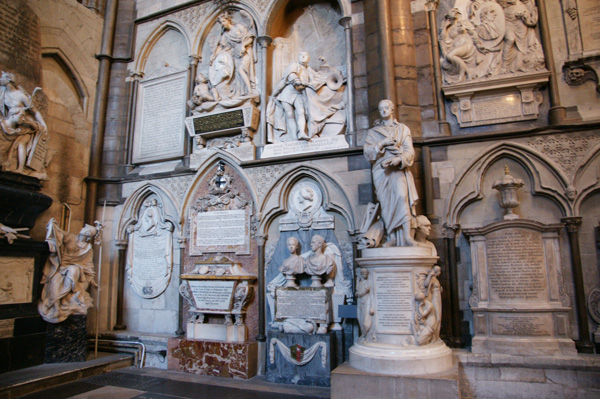 Keats House, John Keats lived in this house on the edge of Hampstead Heath with his friend Charles Brown for almost two years, where he is said to have written “Ode to a Nightingale.” Keats moved to Italy in 1820 as his tuberculosis deteriorated, leaving his fiancée Fanny Brawne in England, and the house was inhabited by various London celebrities throughout the rest of the 19th century. Today, the Keats Museum is housed in the adjacent coach house and showcases a collection of Keats’ letters, the engagement ring Keats gave Brawne, and a copy of the poet’s death mask. The house also hosts a variety of literary events, as well as guided walks around the neighborhood. 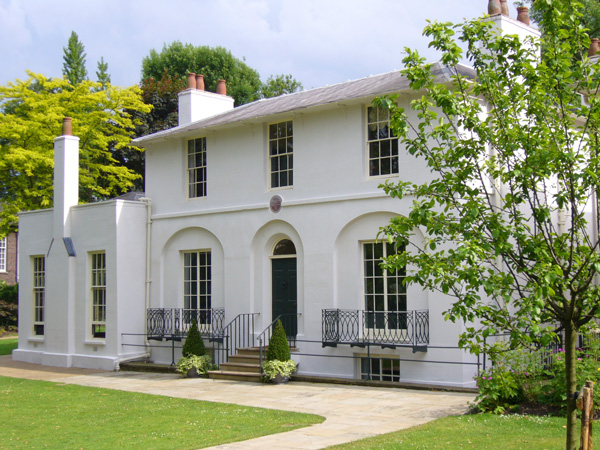 Shakespeare’s Globe, In a city full of landmarks, the Globe Theatre is one of London’s most iconic spots. While the modern reconstruction is not even 20 years old, the recreation of the 1599 theatre has been painstakingly modeled after the original space that Lord Chamberlain’s Men called home. The original Globe caught fire in 1613 during a performance of Henry VIII and was rebuilt the following year, before the Puritans shuttered it in 1642. For a true Shakespearean experience today, view a performance from the pit, the standing-room space directly in front of the stage; this season, the Globe is staging Antony and Cleopatra, Julius Caesar, King Lear, and The Comedy of Errors, as well as other non-Shakespeare productions. Alternatively, take a tour of the theatre. 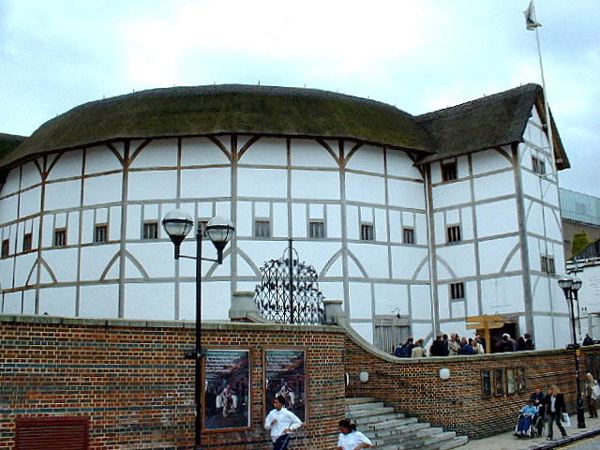 The Sherlock Holmes Museum, Though technically located between 237 and 241 Baker Street, The Sherlock Holmes Museum proudly declares its address as 221b Baker Street in honor of Sir Arthur Conan Doyle’s famous detective. This homage to one of literature’s most famous sleuths can be found just off the southwest corner of Regent’s Park, and fans of all things Holmes will enjoy the small museum filled with period exhibits, Holmes memorabilia, and a mock-up of the detective’s study looking onto the street. Even if you decide to opt out of the museum tour ($16), this spot is still worth a visit for the outstanding gift shop, in-character staff, and Baker Street tube station, covered in Holmes’ silhouettes. 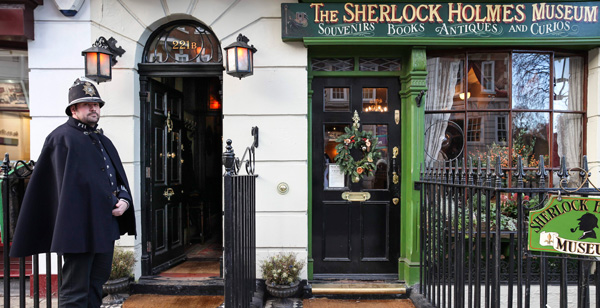 The British Library, What better place to begin a literary tour of London than at a library? Originally part of the British Museum, the Library moved to its current location on Euston Road in 1998, transferring its collection to the 1.2-million-square-foot space. With more than 150 million items in its collection, including manuscripts that date back 4,000 years, the British Library is the second largest library in the world, behind the Library of Congress. Literature fans should make a beeline for the Sir John Ritblat Gallery, just to the right of the main entrance, to view the Library’s stunning archival collection, which includes the Magna Carta, a Gutenberg Bible, original copies of Beowulf, The Canterbury Tales, Jane Eyre, and Shakespeare’s First Folio, and select works from Jane Austen to the Beatles.

The George Inn, This Southwark pub dates back some 400 years, though it was virtually destroyed in the Great Fire of London in 1666, and stands as the last remaining galleried coaching in in London. Charles Dickens was a frequent visitor of The George Inn, and he even mentioned it in Little Dorrit (in chapter XXII). Shakespeare is also rumored to have frequented this pub, though this is largely speculation due to its proximity to the Globe. The George is now owned by the National Trust to maintain the pub’s nostalgia-inducing, literary-steeped atmosphere. 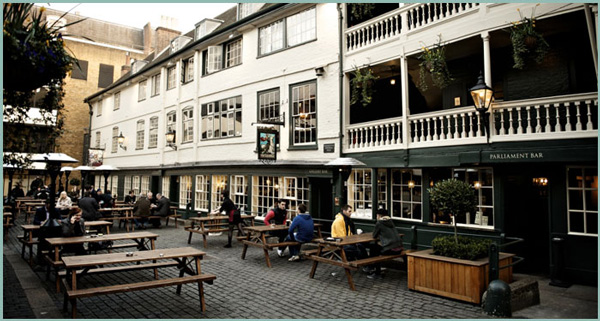