The Kelimutu volcano in Flores, Indonesia, is world-renowned for its three crater lakes at the summit, which keep changing colour. The ride up from Moni village begins pre-dawn in a truck that takes you close to the crater rim. Hawkers selling hot tea and fried banana are already up and serving in the rugged car park. A short walk by torchlight through the undergrowth in the darkness and the land rises steeply to an abrupt stop. Crawl to the edge and by moonlight you can make out a sheer drop into the deep black lake in the crater below. It is both terrifying and exhilarating to be on the rim of a volcano by night. Edging along to a viewing point for sunrise feels like an achievement of survival in itself. Once the sun is up you can fully appreciate the colourful sulphur lakes with the few who have ventured this far east down Indonesia volcanic rim. 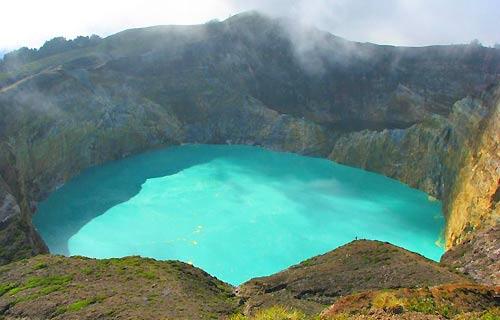 At one mile deep and 277 miles long, the world’s most famous gorge offers a glorious vista of colourful rock formations that never fails to surprise the first-time visitor with its grandeur. Although there are wider and deeper canyons elsewhere in the world, this is the most visually spectacular. Carved out by the Colorado River below – itself a big draw for whitewater rafting – the Grand Canyon attracts five million visitors a year. You can avoid the worst of the crowds by visiting the North Rim in spring/summer, the South Rim in winter – when the views are crisp (and the parking easy). And check out the remote West Rim’s new-ish SkyWalk, a glass-bottomed bridge built in 2007 that extends out over the canyon, for a scarily crystal clear view ($30 or less when bought as part of a tour). 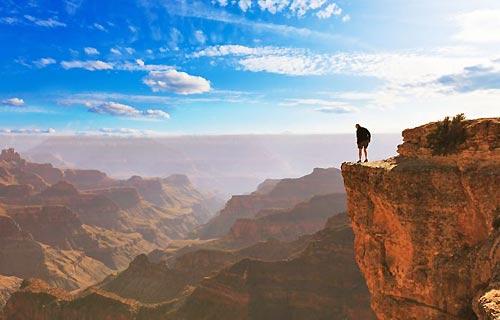 The Dead Sea is shrinking due to water management in the hot, dry countries that surround it. It may even disappear in as few as 50 years so this is a must-see with a deadline. Entering the extremely salty waters (eight times saltier than the sea) is an experience in itself – firstly because it is velvety-soft, secondly because any tiny little cut will sting like heck and thirdly because all pain disappears in the wonderment of being weightless in water. It’s not just the fun of super-buoyancy that makes the Dead Sea worth a visit though. Smother your body in Dead Sea mud, and the green goo is said to take 10 years off you. You can also say you’ve been to the lowest place on earth as the shore is 420m below sea level. 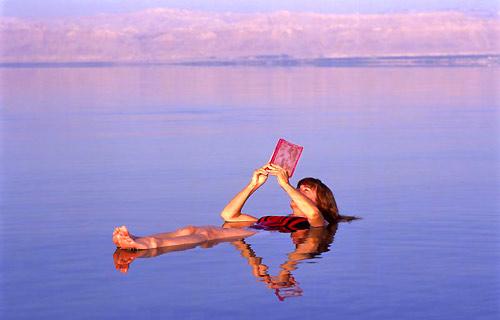 You don’t have to be a world-class climber to experience the world’s highest mountains; the foothills are a spectacular place from which to view the 8,000m snow-capped peaks of the Himalaya. While many head for Nepal’s Everest region, a more scenic trekking route is the Annapurna region, near picturesque Pokhara. It takes three days of walking from the road to reach Chomrong, a village just below the snowline but at 2,000m high it gives excellent viewing for not one but three peaks: Machapuchare (the distinctive Fish Tail peak), Annapurna South and Hiunchuli. A few hundred zigzagging steps straight down the foothill brings you to Jhinu, famous for its hot springs – and with the Himalayas all around, it’s one of the best soaks you’ll ever have. Then wind back down the valley through Tolkienesque scenes of rhododendron forests, rope bridges and millers in the river. 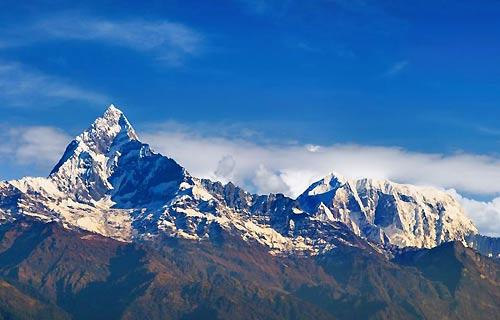 When it comes to mountainous must-sees in Europe, the Alps are the pretty chocolate box option. But for a little adrenaline rush, head for Lomnicky Stit, a 2,634m-peak in Slovakia’s High Tatras mountains. There’s a tiny gondola cable car to take you to the top that for years was the longest single stretch of unsupported cable between two points. The gondola takes just 13 passengers and is particularly eery in low visibility with clouds swirling all around. On a clear day, though, you get the sense of flying through the open air between the mountains. Once at the peak, the Observatory has a bijou, cockle-warming café-bar where Jamaican Blue Mountain coffee is served alongside organ-warming shots of local Hruskavica pear brandy. You’ll need something for venturing out onto the snow walkways, some of which jut out over sheer drops of thousands of feet to the valley floor. From here, it’s possible to see four countries: Slovakia, Poland, Czech Republic and Austria. 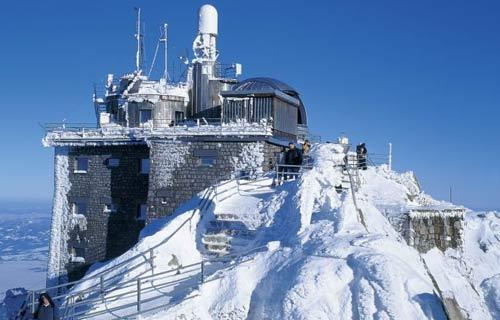 Six hundred miles off the west coast of Ecuador lie the actively volcanic Galápagos Islands, world-famous for the incredible variety of homegrown creatures – from 200kg giant tortoises to small tropical penguins, and from the multi-coloured Sally Lightfoot Crab to the blue-footed Booby Bird. This is where Charles Darwin came to study and observe, before going on to form his theory of evolution by natural selection. The landscape may be desolate – and the tourist cruises can be seasicky – but the variety, abundance and friendliness of the marine life is unequalled. Tip: go in June/July to see the migration of giant tortoises from the highlands to their nesting place. 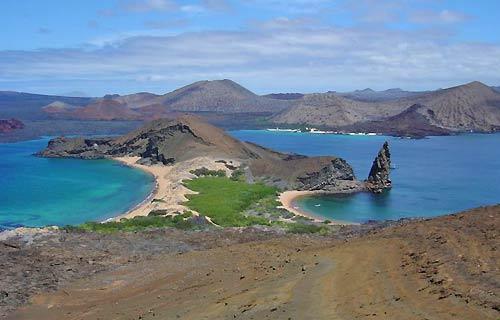 They may be among the most expensive holidays you can buy, but a safari holiday really is the experience of a lifetime. You may not think so when troupes of baboons are bouncing off your platform tent at 2am, elephants are ripping bark off the tree outside your flimsy window or you can hear slithering through the undergrowth, but the sense of entering the animal kingdom and getting up close to those higher up the food chain than you is both awesome and humbling. Kenya is the original safari destination with the Masai Mara and the great migration of the wildebeest, and snow-capped Mount Kilimanjaro viewed from Amboseli National Park, but there are many more to choose from across Africa. Also, look for the big game and desert safaris of Namibia, the Serengeti in Tanzania, the Kalahari in Botswana, Luangwa in Zambia, Mvuu and the Shire River safaris in Malawi and self-drive in Kruger National Park in South Africa. 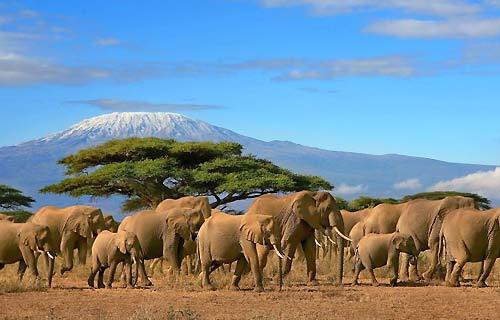 The number of natural attractions on this relatively small island is astounding. NZ’s South Island offers not one but two rare mountain-to-sea glaciers in the Fox and the Franz Josef (heli-hiking is a fantastic options for exploring these). The snow-capped Alps offer both softly opaque and perfect mirror lakes of astounding beauty. In the south is Fjordland, where mountains plunge up to half a kilometre to the sea floor. In the north is the incredibly pretty Abel Tasman, a coastal trekking route that leads trekkers across estuaries at low tide. Kaikoura on the east coast is the jump-off point for whale spotting and dolphin swimming as the continental shelf is so close to shore. And that’s not even mentioning Queenstown – the place to boost your adrenaline credentials with activities from the mild to the wild, from canyon swinging to jetboating. 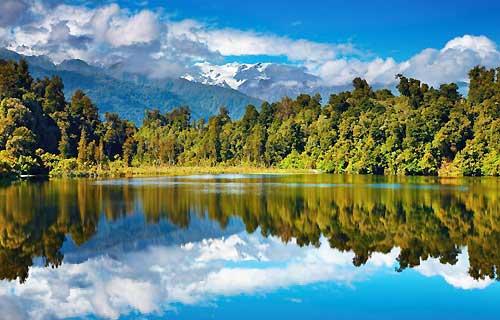 Iceland is another country that has it all in a small space. The ‘land of fire and ice’ is a geothermal wonderland of volcanic craters, lava fields, glaciers, geysers that spew boiling water into the air and some of the most powerful and impressive waterfalls in Europe. In the centre lies an 8km-rift valley caused by the tectonic plates of North America and Eurasia pulling slowly apart. Walk along the North America ridge or even dive in the rift lake and experience some of the clearest visibility in the world. And if that’s not enough, one of most people’s must-sees can also be experienced here: the Northern Lights. Visit from March to April for a chance to view this gentle phenomenon. 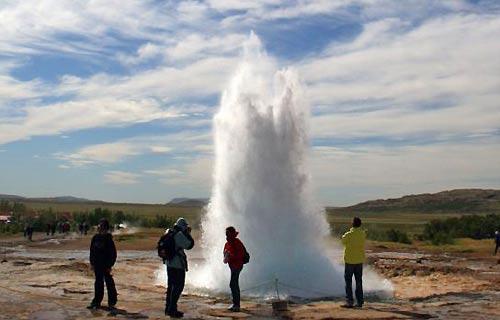 Australia has many must-see attractions but the most spiritual option is Uluru and the Red Centre. Take the classic Ghan Train from Adelaide (A$358), and 24 hours later, through bush and desert, you roll into Alice Springs. From here, you can pick up competitively priced three-day tours to take in the wonders of the Red Centre, including Kata Tjuta (The Olgas) and Kings Canyon (where the drag queens from ‘The Adventures of Priscilla, Queen of the Desert’ stood triumphantly at the end of their journey). But it’s Uluru/Ayers Rock, that is the main attraction. This 348m-high sandstone rock is sacred to the Aboriginal people so instead of climbing it, try the 10-km walk around the base to really get a sense of the enormity and see the rock formations right up close. Return at sunset to see the ever-changing colours as the light changes. 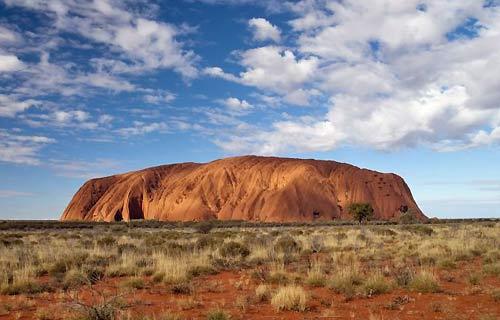 places to visit in the world, world's most beautiful places