Ye Olde Cheshire Cheese, You can’t turn around in London without bumping into a centuries-old pub, but Ye Olde Cheshire Cheese has a certain well-worn patina that not many can match. A pub has stood on the spot since 1538 (though it required substantial rebuilding after the Great Fire of London in 1666) and the vaulted cellars below date back to the 13th century. Ye Olde Cheshire Cheese has become a city landmark, but hasn’t lost any of its charm. There’s a list of every English monarch who has ruled since 1667 beside the door (Charles II was on the throne at the time) and a host of illustrious writers is said to have frequented this London institution at one point or another. Keep in mind that there is more than one pub with the “Cheshire Cheese” moniker, so be sure to visit the original at 145 Fleet Street. 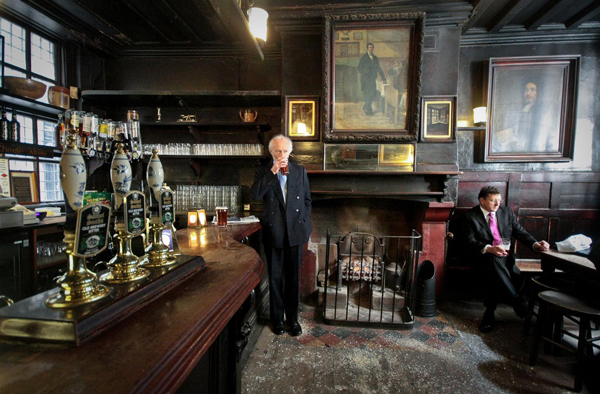 Lamb & Flag, Tucked in a back alley, Lamb & Flag is the kind of place you’ll find only if you’re already looking for it. Despite its proximity to the crowded, though still charming, Covent Garden, this pub is refreshingly kitsch-free and has stood on the same site since 1772, and counted Charles Dickens as one of its regulars. You’ll likely have to politely shove your way to the bar, but the centuries-old wall hangings, worn wooden bar, and authentic charm make Lamb & Flag well worth a visit. 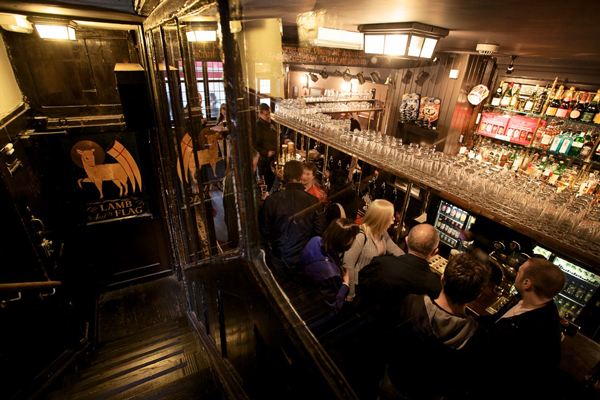 The Spaniards Inn, If you’re staying in central London, the trek to this Hampstead pub can feel like quite a journey, but it doesn’t get much more atmospheric than this. Originally built as a tollbooth at the entrance to the Bishop of London’s estate, The Spaniards Inn is awash in dark oak paneling, lit by a seemingly dangerous open fire in one corner. The pub also has a long literary history; the wooden bench outside proudly declares “Keats enjoyed many an Ale here,” and Spaniards is mentioned in both Dracula and The Pickwick Papers. In the winter, you’ll find a steaming cauldron of mulled wine behind the bar and during the warmer months, enjoy the exceptional cheese board in the garden. 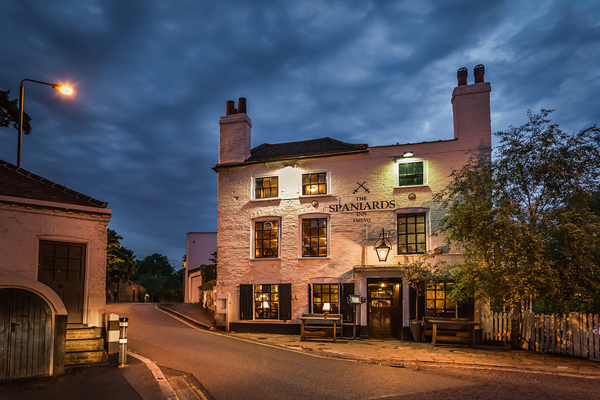 The Churchill Arms, Of all the pubs in London, The Churchill Arms may have the most distinctive look. Coming down Kensington Church Street, you’ll be able to spot this Notting Hill institution from several blocks away with its floral-covered façade and regal, tiered structure. Once inside, be careful not to knock over any of the hundreds of knickknacks (and a striking amount of Winston Churchill memorabilia) hanging from the walls and ceiling. Ironically, the pub named after the great British leader is in fact an Irish establishment and to add more confusion to the mix, The Churchill Arms houses an unusually good Thai restaurant in the back. 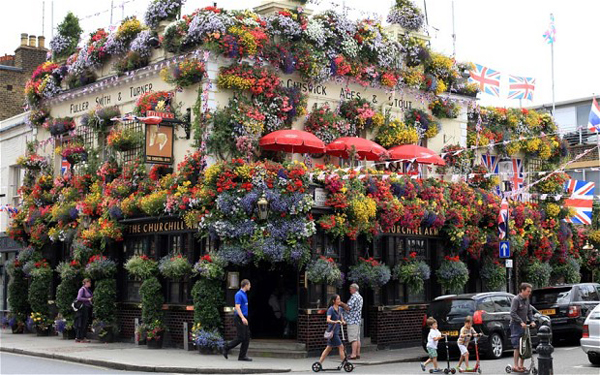 The George Inn, A map of London from circa 1543 indicates that the “Gorge” stood on the spot where The George Inn stands today, and though the pub was rebuilt after the London fire, it traces its roots back to medieval times. Now owned by the National Trust, The George Inn continues to serve beer and traditional English fare to Londoners as it has done for hundreds of years in its Southbank location, not three blocks from The Shard, the city’s newest landmark. The final remaining galleried coaching inn in the London, the pub boasts two spacious interior rooms in addition to the Oktoberfest-style lines of picnic tables in the courtyard. 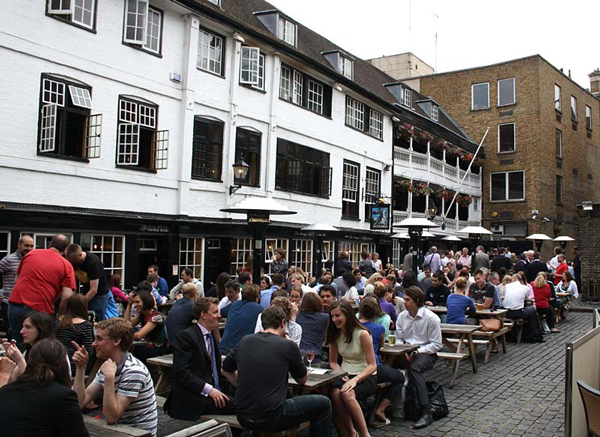 The Mayflower, Another of London’s oldest pubs, The Mayflower dates back to 1620 and, not coincidentally, was the site from which the ship of the same name set sail for New England in July of that year (the pub was renamed when it was substantially remodeled in the 1700s). The upstairs room offers a more upscale dining experience, and the downstairs bar and deck overlooking the river make for the perfect drinking environs. If you’re looking for the cheapest pint in the city, you won’t find it here, but the unique atmosphere and great location along the Thames make the price worth it. 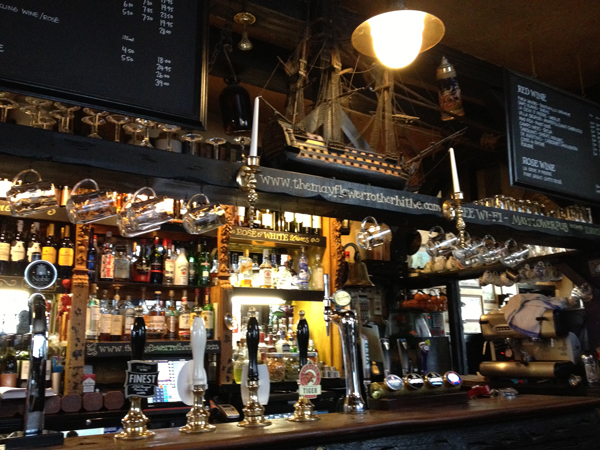 Ye Olde Mitre, Even when sober, finding Ye Olde Mitre can be a bit of a challenge, hidden down a narrow passageway on Ely Court off Holborn. The tavern is wedged between St. Etheldreda’s Church (one of the oldest Catholic churches in England) and Hatton Garden, and has become famous for the cherry tree that stands out front, which Queen Elizabeth I is said to have danced around. Spilling outside the pub’s doors is almost preferable here, as Ye Olde Mitre has the quiet alleyway to itself and has strung mini English flags overhead. Beer steins and pitchers hung on the ceiling give the place a quaint, cluttered feel, and bargoers hoping to find some original fare will be pleased with the tapas-inspired menu. 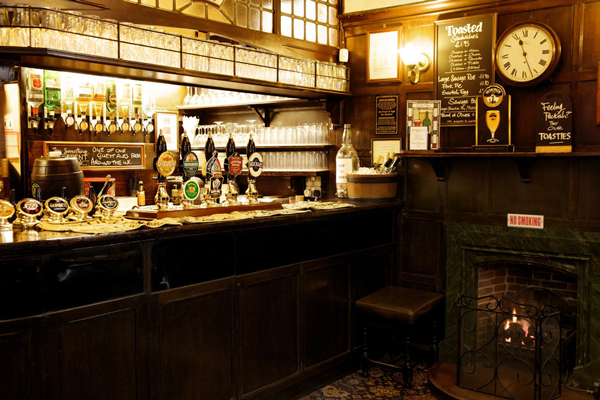 The Nags Head, There are pubs with authentic, old-school charm and then there’s The Nags Head (53 Kinnerton Street). The no-cellphones policy is strictly enforced, you’ll be firmly asked to hang up your coat upon entering, and you won’t find a TV on the premise, though penny arcade games are dotted around the room. Kevin Moran is practically a caricature of a traditional pub owner and the locals who frequent The Nags Head are equally eccentric. The prices are a bit steep, but you’ll be paying for the atmosphere more than the beer. 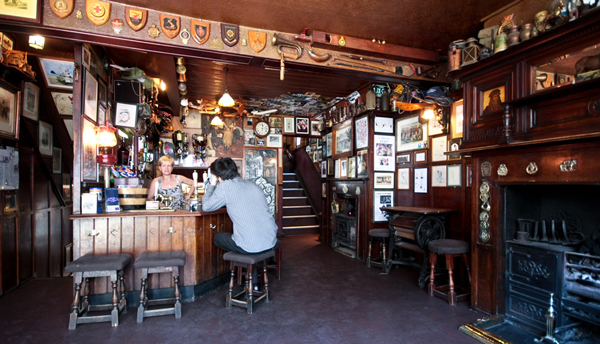 The Flask, The Flask can be something of a mind-bender, no matter how much or how little you’ve had to drink; with two separate entrances and two bars that have no interior connection, finding your way around this historic space can be a bit of a challenge. Originally built with a separate public bar and saloon bar (the former the more modest option), The Flask has maintained its original charm with the addition of a more modern dining room in the back. A perfect blending of the old with the new makes this Hampstead spot (with a surprisingly long wine list) an inviting spot to imbibe, situated along the impossibly quaint Flask Walk a block from the Hampstead Tube station. 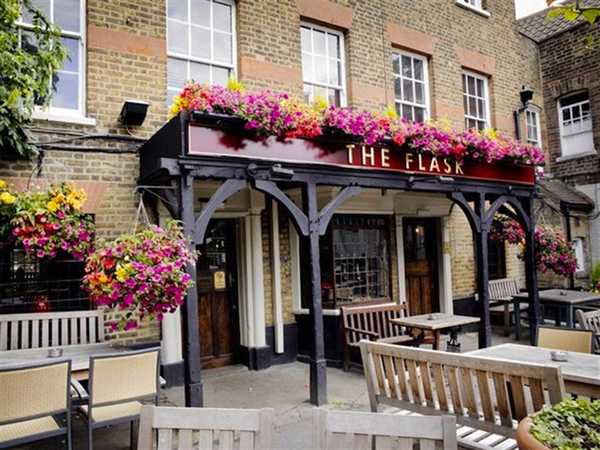 The Antelope, Though found near Sloane Square, one of the most expensive parts of an already pricey city, The Antelope offers up a quintessential English pub atmosphere without emptying your pockets. To boot, the food is exceptional for a pub and the wood-paneled exterior looks particularly inviting on the otherwise quiet, residential street. Looking for something more sophisticated? Head upstairs to the Eaton Room, outfitted with red curtains, stylishly mismatched wooden chairs, and mint-colored paneled walls. 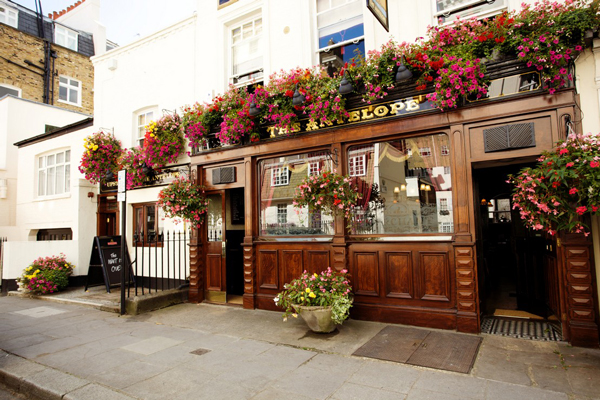