Perch, At Perch, it would be easy to think you’d landed in the South of France if it weren’t for the nearby skyscrapers. This 15th-floor bistro draws its inspiration from vintage French restaurants, with plush antique furniture, wicker chaises, and intricately carved fireplaces. Visitors can opt for indoor seating under sweeping 30-foot ceilings, or relax at a table at the bar’s outdoor rooftop patio. On cooler evenings, guests can move up to the 16th floor to enjoy a drink around fire pits and live jazz music. Drinks take on a Parisian flair with cocktails like the “French Maid” with cognac, lemon, cucumber, and fresh mint. 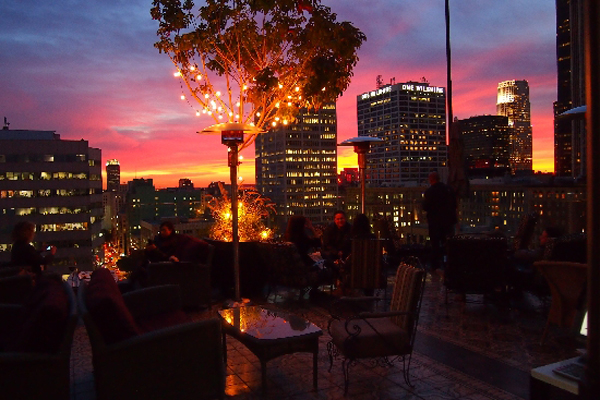 Juvia, South Beach views and ultramodern décor keep guests coming back for more at Juvia, one of Miami’s most popular rooftops. The restaurant and bar takes on the city’s laidback, Art Deco vibe, and features a vertical garden designed by an internationally renowned botanist. The French-Asian fusion menu offers a wide variety of ceviches and light crudos, including salmon nashi with truffle oil. 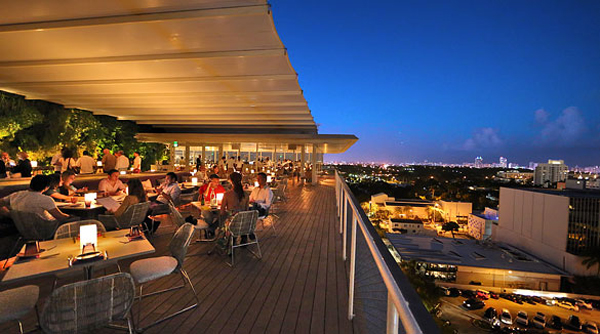 I|O Urban Roofscape, Perched on the fourth floor of Chicago’s Godfrey Hotel is I|O Urban Roofscape, one of the city’s most popular rooftop lounges. The 10,000-square-foot space features uninterrupted views of the city skyline, with indoor and outdoor areas, appropriate for the Windy City’s notoriously unpredictable weather. Visitors can enjoy drinks in communal booths under a retractable roof, or kick back next to a two-level fire pit during the winter. The Roofscape’s handmade cocktails put a modern spin on classic libations; standouts include the “Chef’s Margarita” with Don Julio, Cointreau, and salt air foam; and the “Spiked Root Beer Float” with Courvoisier. 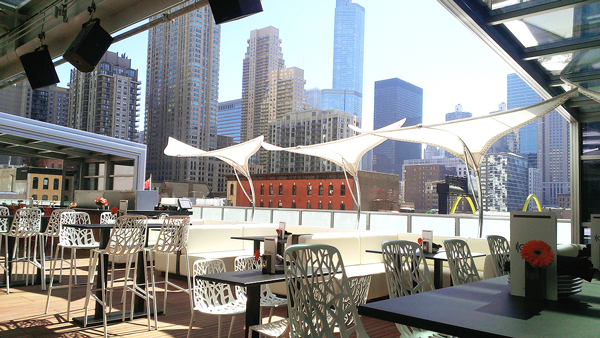 The Skylark, For a drinking experience that exudes Old World glamour, visit New York’s The Skylark. Towering 30 stories above Gotham, the lounge features panoramic views of the Hudson River and Empire State Building and offers classic cocktails with fresh, seasonal ingredients. Specialty cocktails are crafted by an expert mixologist, and include the eponymous favorite “The Skylark” with Hendrick’s gin and Blue Curacao. 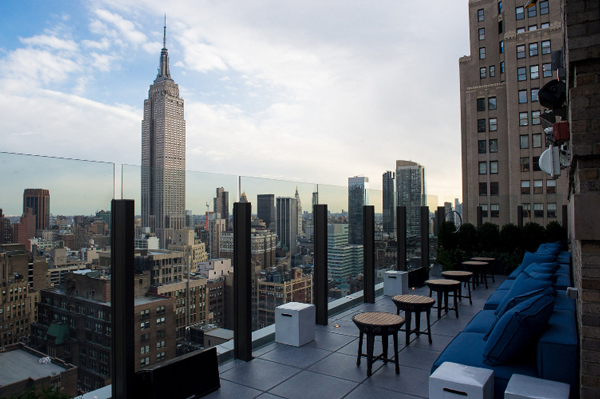 Three Sixty, For unparalleled views of one of the Midwest’s most iconic monuments, look no further than Three Sixty. Located atop the Hilton St. Louis at the Ballpark, the bar offers dramatic views of the Gateway Arch and a bird’s-eye view of nearby Busch Stadium. In addition to wine, beer, and cocktails, visitors can enjoy handcrafted small plates like roasted BBQ oysters and house-smoked salmon chips. Don’t miss the bar’s Cardinals-themed infusions: the “#Worldseries 2014” mixes Salerno blood orange, Aperol, and Prosecco; and the “Yadier Mind” (named for the popular catcher) features Malibu Spiced rum infused with pineapple and banana. 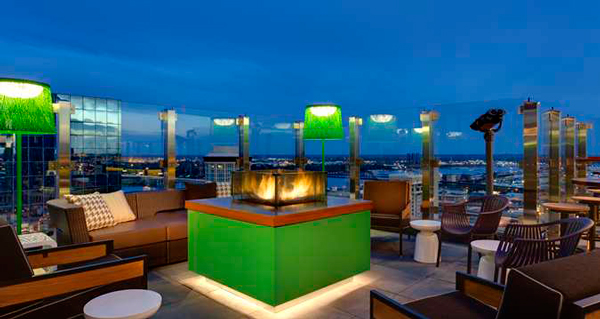 Frolik Kitchen & Cocktails, Modern furnishings, seasonal cocktails, and expansive outdoor seating make Frolik Kitchen + Cocktails one of Seattle’s most beloved destinations. Outdoor fireplaces and colorful modern seating give the venue a futuristic feel, and bright orange ping pong tables and shuffleboard courts add to the bar’s whimsy. Indulge in one of the Pacific Northwest-inspired cocktails, which include the “Marionberry Smash,” made with Mischief whiskey and fresh marionberry. 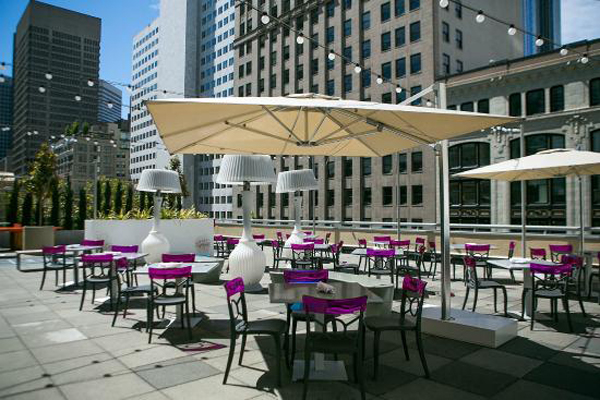 La Fonda’s Bell Tower Bar, Watch the sun setting over the Jemez Mountains at Santa Fe’s La Fonda’s Bell Tower Bar. Located at the top of La Fonda on the Plaza hotel, the bar dishes out light fare with a Southwestern twist, and offers an extensive beverage menu with signature margaritas. Visitors who finish a bracing “Bell Ringer” margarita (Tanteo Jalapeno Tequila, jalapeno juice, and Patron Citronge) get to ring the bell. 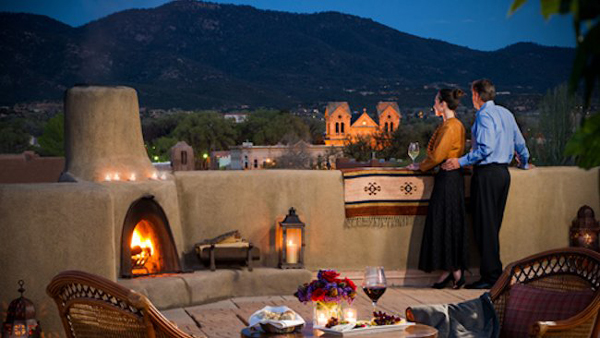 El Centro D.F., Mexican comfort food and a huge selection of tequilas keep visitors coming back for more at El Centro D.F. The D.C. hotspot features two spacious, open-air patios, and mixologists who carefully craft drinks from 200 varieties of tequilas and mezcals. Stop by during happy hour for deals on the bar’s signature cocktails, including the “El Centro Margarita” made with pure agave tequila, agave nectar, and lime; and the “Tinta Roja” sangria. 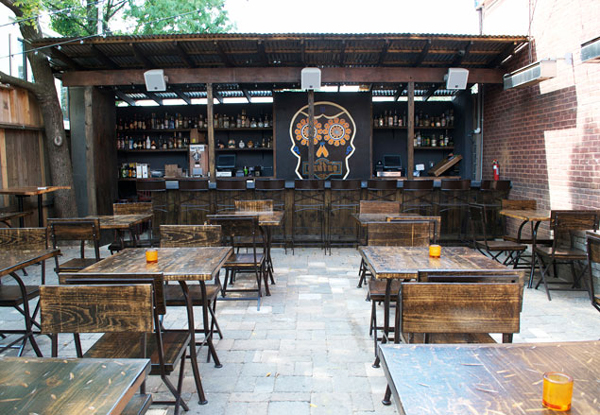 Six Feet Under, Take in the Atlanta skyline from Six Feet Under, one of the city’s most popular rooftop bars (there are two locations). Visitors can order beer by the glass or pitcher; popular pours include locally made Eventide Kolsch and German Spaten Lager. But Six Feet Under is no one-trick pony; guests can also sample themed cocktails like the “Georgia Mule” with Savannah 88 handcrafted bourbon, or enjoy the pub’s extensive seafood menu; the fried calamari with spiced cornmeal and homemade horseradish-dill sauce is the perfect accompaniment. 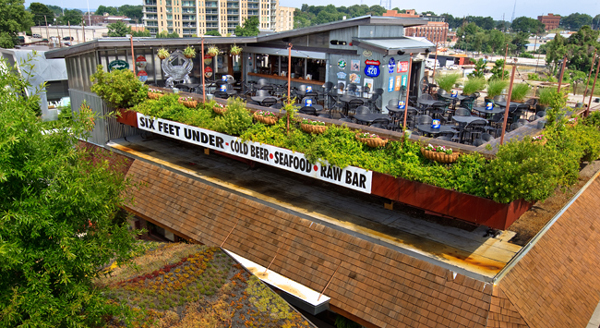 SODA Bar, Set above the streets of downtown Dallas is SODA Bar, a modern rooftop hideaway with an unabashedly Southern vibe. Tucked away at the top of NYLO boutique hotel, the bar offers sweeping views of the city lights and a diverse drink menu. Pop open a bottle of Veuve Clicquot, or leisurely sip a “NYLORita” (PAMA liqueur, lemonade, cranberry, and 1800 Silver). For guests who bring an appetite, popular appetizers include the shrimp nachos with queso fresco. 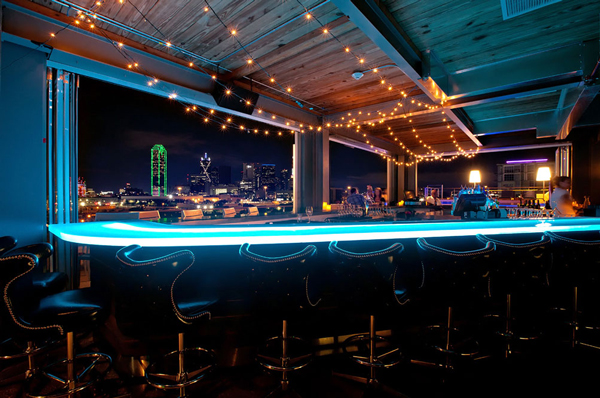 Linger, Once a historic mortuary, Denver’s Linger has since transformed into a vibrant restaurant serving vegan-friendly small plates and a wide selection of local brews. The whimsical “eatuary” makes the most of its location, offering stunning downtown views from its rooftop bar and a main dining space with a towering wall of windows. The drink menu emphasizes local and sustainable products, with Colorado draft beers and wines making a standout appearance. But the real show stoppers are the bar’s house cocktails; sip on a “Ginger Collins,” (vodka, ginger, and lemon juice, served over ice with a lemon wheel and cherry) or try “The Devil Inside,” made with rye whiskey, ramazotti amaro, and served with a red wine float. 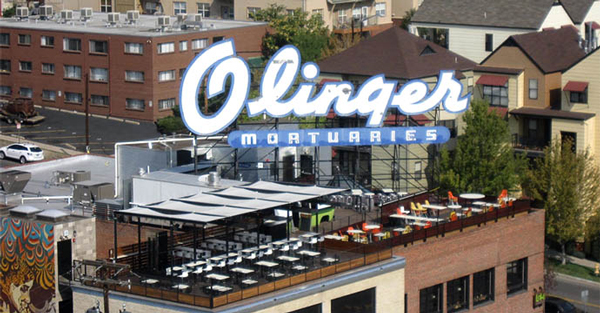 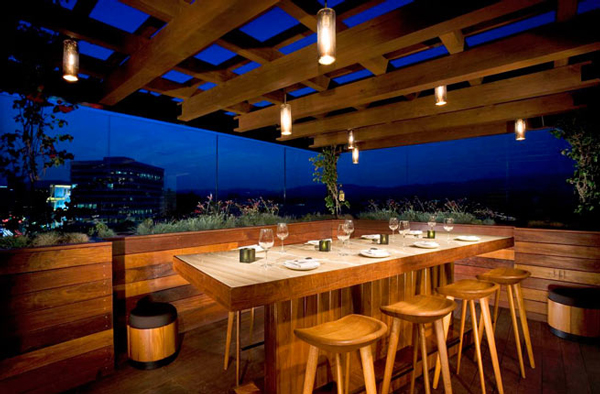 Stars Restaurant & Rooftop Bar, Step back in time at Stars Restaurant & Rooftop Bar. Housed in a restored Arts and Crafts building, the Charleston hot spot features upscale 1930s décor and a rooftop bar with a 360-degree view of the city’s historic district. International wines, cocktails, and beers round out the menu, which includes an extensive list of cordials, bourbons, and whiskeys. Don’t leave without trying the bar’s original cocktails; the “Southern Belle Bathwater” puts an innovative spin on traditional Southern spiked lemonade. 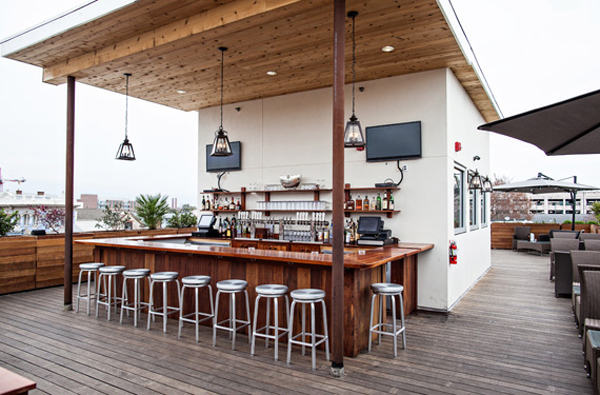 Departure, Nines Hotel, Set in the 15th floor penthouse above the Nines Hotel is Departure, a Pan-Asian restaurant and cocktail bar with an ultramodern vibe. Views of the city skyline and mountains are only half the bar’s appeal, as the creative food and cocktails attract a near-cult following. Handcrafted drinks extend the venue’s Asian flair, and popular picks include the “Tasho Macho” (Thai chili vodka and ginger beer) and the “Kato,” made with Russell’s Reserve bourbon and muddled lychee. 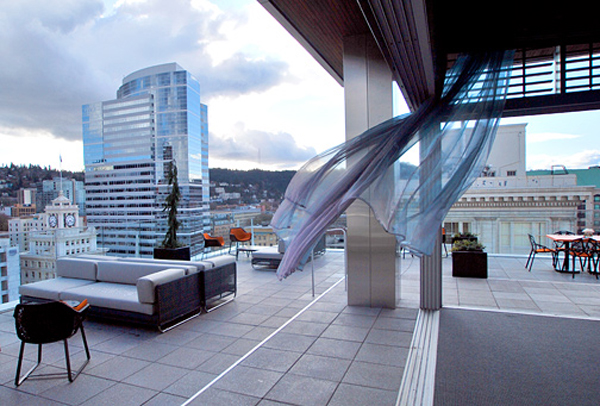 Lustre Rooftop Garden, As the only rooftop lounge in the downtown Phoenix area, Lustre Rooftop Garden doesn’t disappoint. The bar features views of the city skyline and South Mountain, and serves up creative cocktails made from locally sourced ingredients. Visitors can lounge poolside with a drink, or reserve a cabana for a more secluded experience. Craft cocktails take on a Southwestern flavor; try the “Prickly Pear Fizz,” with Ford’s gin, prickly pear syrup, and lime. 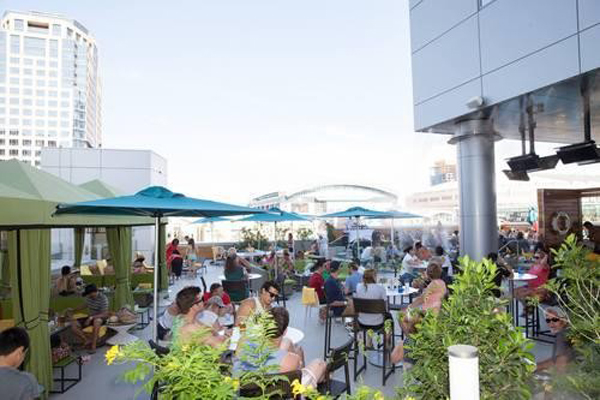