Top 5 Cruise routes, Some of the planet’s most glorious destinations unfurl best when viewed from a cruise ship. We take a look at the top 5 iconic cruise routes. From vibrant cities to exotic beaches, there’s something for everyone.

Enjoy one of the world’s last great unspoilt wildernesses with a cruise through Alaska, a land of eye-popping beauty and a thrilling array of animal and marine life. Imagine aqua-coloured, mile-high glaciers, soaring mountain peaks, rainforest-blanketed coastlines, and frontier towns little changed from the days of the gold rush. Look out for grizzlies and brown bears gorging on salmon, majestic bald eagles, the distinctive fluke of a humpback whale, seals and sea lions lazing on icebergs, frolicking dolphins, impressive orcas and more. Shore excursions in Alaska include wildlife viewing tours as well as the chance to appreciate the scenery from all angles: choose from helicopter trips and sea kayaking to glacier trekking and mountain biking. 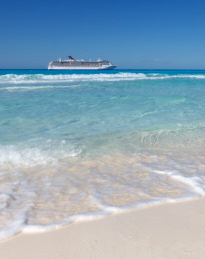 Look no further than the Caribbean if you want a cruise filled with sun, sea and sand. Throw in enticing adventures like swimming with dolphins, horse back riding on talcum white sands, sailing, surfing, fishing and diving, together with the chance to sample laid back vibes, feet-tapping music, colourful ports and bustling markets, and you can’t go wrong.

Thanks to the geography of the region, many small islands can be crammed into a week-long cruise, making it a great choice if you’re time poor. Cruises tend to start from one of the islands, or from US ports in Florida or Texas. Eastern Caribbean cruises typically include Antigua, Barbados, Dominica, Martinique, Puerto Rico, St Croix, St Kitts, St Maarten, St Lucia and St Thomas; western Caribbean itineraries take in the Cayman Islands, Jamaica, and Mexico while southern Caribbean cruises call at Barbados, Trinidad and Tobago, Tortola and the ABC islands.

If you’re a cruise virgin, don’t be too ambitious; choose a week’s western Med cruise to earn your sea legs. Crammed with a medley of arts, culture, historical gems, beaches, cafes, shops, not forgetting mouth-watering food and wine, you’ll visit some of Europe’s most breathtaking cities such as Rome, Florence, Portofino (Italy); Barcelona, Alicante, Cadiz, Palma (Spain); Monte Carlo, Cannes, St Tropez (France); Lisbon, Portimao (Portugal), sometimes even sailing as far south as exotic Casablanca (Morocco). With a blend of large and medium sized ships, there is something to suit all budgets but bear in mind the former are likely to offer a more diverse blend of shore excursions.

Best time to go: All year around, but avoid the summer if you don’t like crowds and high temperatures.
Ships to the Med: Carnival, Costa Cruises, Holland America, Princess, Silversea and Windstar.
Alternatives: Baltic, or river cruises such as the Nile, Danube or Rhine

For trip of a life time: world cruise

Circumnavigating the globe has to rank as one of the world’s best adventures and is probably one for seasoned cruise-lovers. If you genuinely enjoy onboard life, the opportunity to make life-long friends and spending endless days at sea, gazing at horizons unblemished by anything other than spectacular sunrises and sunsets, this is definitely for you. You’ll experience the best of everything from far-flung beaches and exotic wildlife to off-the-beaten-track ports, vibrant cities and fascinating cultures. Thoroughly indulgent, a world cruise is only for those who have buckets of time – and money – on their hands.

Best time to go: Most are from January to March, but ex-Sydney departures tend to start in May or July.
Ships offering world cruises: Cunard, P&O Cruises, Fred Olsen Cruise Lines.
Alternatives: Consider booking a segment of a world cruise instead.

For culture vultures: Asia and the Far East

Enrich your mind with a voyage to Asia and the Far East where you can immerse yourself in an intriguing blend of modern and traditional life; gawp at towering skyscrapers, plunge through chaotic street markets, retreat to serene temples, escape to peaceful paddy fields and visit thought-provoking timeless monuments.

Itineraries on an Asian and Far Eastern cruise include an exciting range of ports of calls in Singapore, Thailand, Malaysia, Myanmar, South Korea, Vietnam, Cambodia, Japan, China, Macau, Taiwan or the Philippines. Often with a strong focus on the history and culture of ancient civilisations, you can choose a ship with guest lecturers, historians and former ambassadors while shore excursions include everything from visits to old colonial capitals to dusty villages. Cruise ships typically depart from Asian ports, or Australia, New Zealand or Dubai.

Best time to go: Between October and May although weather varies throughout the region.
Ships to Asia and the Far East: Voyages to Antiquity, P&O Cruises, Royal Caribbean, Cunard, Celebrity Cruises.