Top five most amazing roads, Wind in your hair, top down, and blue sky above, the ultimate driving experiences involve stunning scenery, great weather and a bit of road space. So rev up for our guide to the top five most spectacular driving routes worldwide. 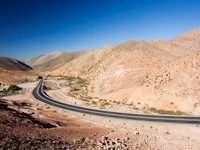 This is the big one, believed to be the longest driving route in the world at around 48,000km (29,800 miles), and we’ve picked a section of it for our top five. The Pan-American is a set of roads between Alaska and Chile, allowing you to drive the length of the continent. This section in Peru has something for everyone as it sweeps along the coast from the architecturally impressive Trujillo to the Peruvian capital of Lima. You get some great views, a touch of urban, plus wide-open, moon-style landscapes and crashing waves. Fellow travellers are often friendly and wave or chat as they pass. Many of the paved roads are great to drive on, but do look out for animals (and occasionally children) wandering on the streets. Take a side trip from Trujillo to the Pre-Columbian Chan Chan, the capital of the Chimu Empire, and a UNESCO World Heritage site. Apart from the stunning desert landscapes, there is lots of animal life to spot along the coast, including sea lions and pelicans.

Top tip: If you pay a toll, do keep the receipt as you may be asked to show it later at another toll gate, and it may save you from paying again. 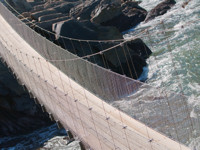 Inhale fresh sea air in this stunning coastal setting as you cruise the celebrated Garden Route in the Western Cape in South Africa. Wildlife breaks are mandatory, as is enjoying great meal stops along the route. There are wildlife reserves throughout the Garden Route National Park you can swing into and spend a sleepy morning in a Jeep looking for giraffes and lions. And just over your shoulder in the big blue there are whales to be watched (if the season is right). Admittedly this is an old favourite, but a goodie, with lots of choices. Stop off in Hermanus, the whale-watching capital of the world, and from June to November you have a good chance of seeing some marine action. For those who really love the wind in their hair, you can rent a Harley Davidson and give the route the Easy Rider touch. Don’t forget petrol stations can be hard to find though, so fill up when you can.

Top tip: Add a trip to the Eastern Cape to your Garden Route trip. It is much less known than the Western Cape and full of great landscapes. 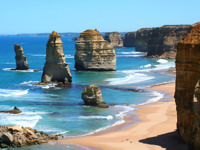 Sweep along this dramatic coastal road in Australia with views of the Southern Ocean from Geelong to Portland, in Victoria, and you won’t regret it. Anyone who has driven it just can’t stop talking about it, and with good reason. There’s loads to see and plenty of great stops. You’ll pass by beautiful beaches and surf crashing in. There’s stunning cliffs too. Don’t miss the Twelve Apostles, the large limestone stacks standing tall in the ocean. There’s whale-watching here too, and other natural life. You might see a kangaroo, koala, seals or even glow worms along the way. Take time out of your car and spend a morning canoeing with platypuses, an experience that you won’t forget. There are wineries along the route, so you could experience the odd tasting, or buy a bottle to enjoy later when you pull over for the evening. And to top it all, they’ll be plenty of good old Aussie hospitality when you pull in for lunch or a coffee stop.

Top tip: Rent an open-top car so you can really drink in that sea air. 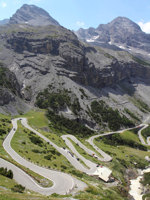 If you like switchbacks and mountain passes, you’ll love this. Stelvio in Italy, originally built by the Austro-Hungarian Empire, is reputed to be the second highest paved road in the Alps, and has 60 hairpin bends, so you can grapple with your gear stick to your heart’s content. Roads are narrow, and views of other traffic can be limited, so it all adds to the challenge. The mountain slopes stretch away on either side of the road, with snow-topped peaks within sight. There’s a great view down the pass. And from the top, it’s just a short sweep away from the Swiss border, so if you are gripped by mountain road driving, you can drive from here down to Swiss ski resort of Davos. Stelvio has 48 hairpins on the north side and 12 on the descent to Bormio, so this route is not recommended for new drivers, or those with a fear of heights. This descent is often featured in the Giro d’Italia, the Italian version of the Tour de France, so you may have glimpsed it on the television.

Top tip: Take some Swiss Francs as well as some Euros, so you can make the trip a cross-border experience. 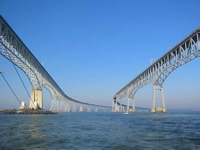 Feel the fear and drive it anyway. This 37km (23-mile) road is 9m (30ft) above the waves of the beautiful Chesapeake Bay, linking the Virginia mainland with its eastern coast, where tourists flock to see wildlife and wide-open beaches. The rollercoaster highway swoops up above the waves, then dips through long tunnels, and while the posted speed limit is 50mph (80kph), the traffic often moves at 70mph (112kph), so there’s no room for waiverers. Views are amazing (for passengers), and there’s even a service station, where you can stop for a bite to eat, a bit of fishing (bring your own pole) or buy a classic bridge postcard. Named one of the seven wonders of the engineering world when it opened in 1964, its challenging driving experience means local police regularly get called out to cases of “bridge fright”, but for lovers of a challenge it is a treat.

Top tip: If you return within 24 hours, retain your ticket and you get a discount on the second journey.