Bohemian Hall & Beer Garden, Dating back to 1910, Bohemian Hall & Beer Garden pays homage to its Czech roots. A favorite amongst Astoria’s Czech and Slovak residents, the bar features authentic brews like Krusovice and Staropramen and a menu of Czech favorites such as tlacenka (pork terrine), fried Muenster cheese, and potato pancakes served with sour cream and apple sauce. Pick up a draft pitcher and mingle on an expansive outdoor patio, or explore the labyrinth of side rooms beside the main bar. 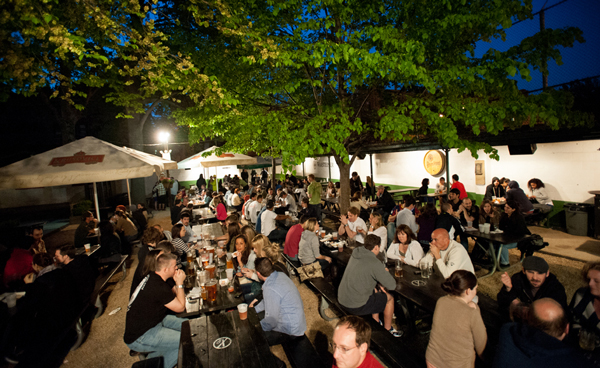 Zeitgeist, At first glance, San Francisco’s Zeitgeist looks like a biker bar; beer signs and bumper stickers line the walls, and many patrons come decked out in leather and tattoos. But there’s more than meets the eye to this Mission hangout, as affordable pitchers of microbrews and a hopping backyard beer garden keep visitors coming back for more. In between bites, enjoy one of the bar’s hamburgers or brats, all served with a choice of home fries or cole slaw. And yes, Zeitgeist also serves a mean Bloody Mary as well. 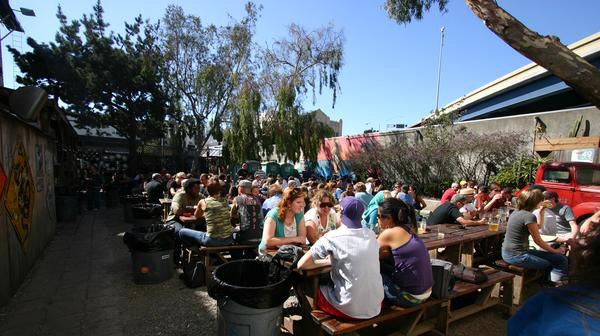 Hofbrau Beer Hall Miami, Miami’s Hofbrau Beer Hall draws its inspiration from Munich’s Hofbrauhaus, offering visitors an authentic drinking experience that rivals the original beer garden. Revelers can enjoy foamed-topped glasses of classic Bavarian brews, and sample a selection of seasonal beer like Hofbrau Maibock and rich, dark Hefe-Weisse Dunkel. For specials beyond the steins, try some of the beer hall’s delicious German fare. The Munchner Weisswurste, or Bavarian white sausage, is served with a soft baked pretzel, and Sauerbraten is served with savory dumplings and traditional red cabbage. 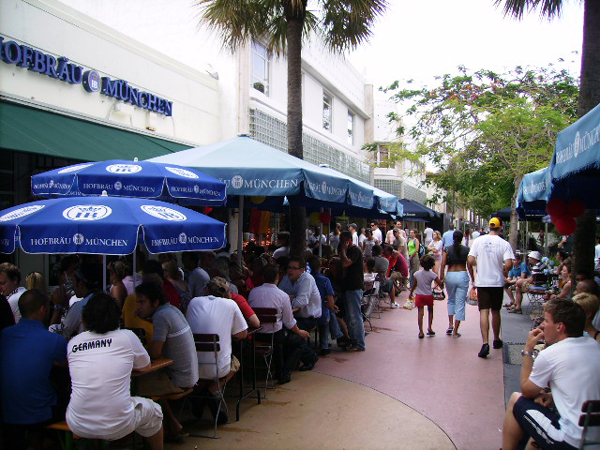 Grunauer, For a taste of Austrian fare in the heart of the Midwest, head to Kansas City’s Grunauer. The brain child of well-known Austrian chef Peter Grunauer, the eponymous restaurant features an extensive list of draft beer and import bottles by the glass, ranging from dark Austrian lager to German pilsners. Brews pair with classic Viennese menu items like grilled, marinated flat iron steak and schwammerl (mushrooms in a white wine paprika sauce with Austrian potato dumplings). 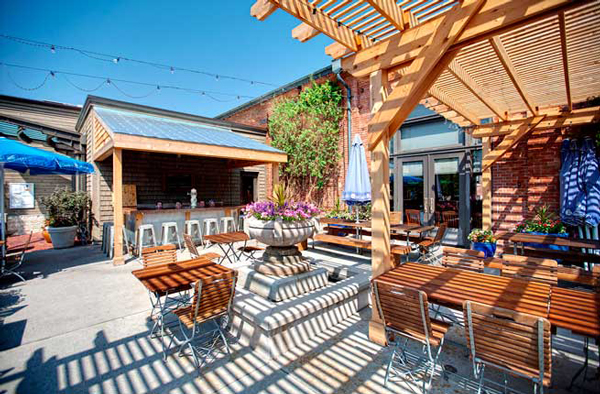 The Red Lion Tavern, A Los Angeles landmark since 1959, The Red Lion Tavern has undergone some serious changes since opening. Originally a traditional English pub with red leather and dark woods, the bar took on its German theme when the new owner’s German wife taught homestyle cooking to the head chef. Now, the gasthaus and beer garden continues to serve up traditional food and features a variety of German brews such as Kostritzer Schwarzbier and classic Spaten Optimator with rich roasted malt flavor. Stop by on the weekends for beer garden specialties like fried German pickles and bratwurst on a roll served with sauerkraut. 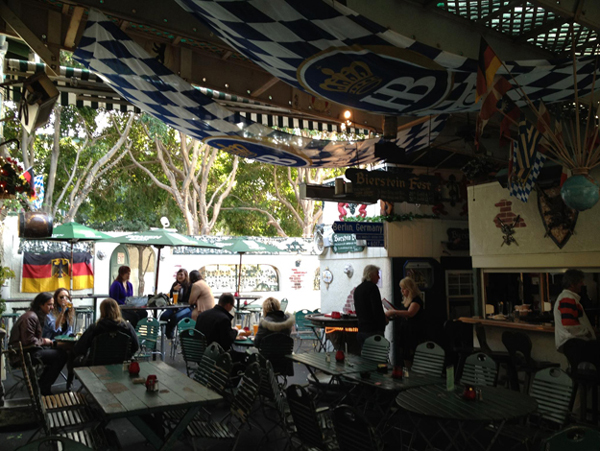 Frankford Hall, Philadelphia’s Frankford Hall mixes the best of both worlds, blending contemporary architecture with a lively German biergarten atmosphere. Set in a modern industrial space, Frankford Hall offers a wide variety of German essen and trinken (food and drink), including Hobrau Sommer and Paulaner Hefeweizen, all served in half or full liter glasses. For food, check out the cheese spatzle with caramelized onions, or sausages made by local artisanal German butchers. 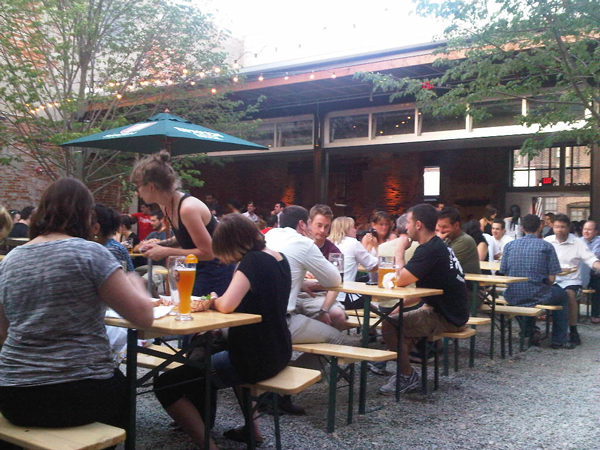 Lowry Beer Garden, Nestled in a park boasting more than 4,500 square feet of outdoor gardens, Lowry Beer Garden is more than your average bar. Located in a redeveloped airplane hangar, the Colorado hot spot features Oktoberfest-style picnic tables that seat up to 350 guests. Taps rotate frequently, but the bar focuses on Colorado craft beers from brewers such as Avery and Odell. German beers and national craft brands round out the list, and guests can also choose from an extensive collection of bottled beer. Food takes on a local twist, with spicy bison brats and chipotle slaw in place of sauerkraut. 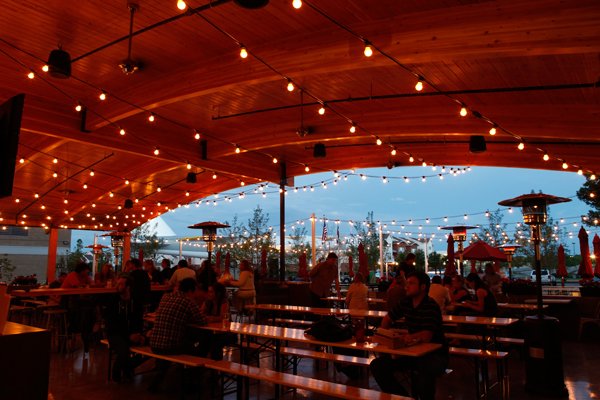 Sheffield’s, Barbecue and beer are the name of the game at Sheffield’s. This Second City beer garden serves up fresh smoked slabs of ribs and a huge selection of craft beers, with nearly 40 brews on tap and bottles from European breweries. Head to the comfortable outdoor patio to enjoy a drink at a shaded picnic table, or pull up a seat at the dark-wood bar. Be sure to order one of the bar’s signature sandwiches. Meat for the pulled-pork sandwich is smoked for 14 hours and shredded to order, and extra toppings include pimento cheese spread, pickled jalapenos, and crispy onion strings. 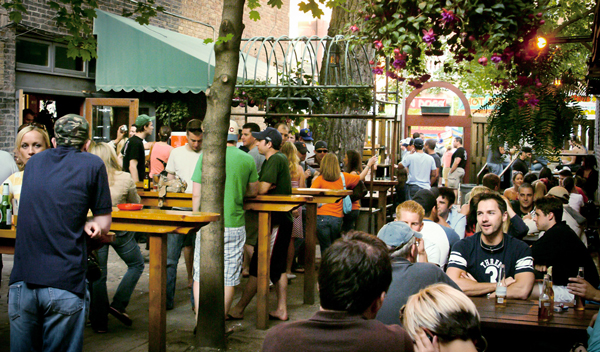 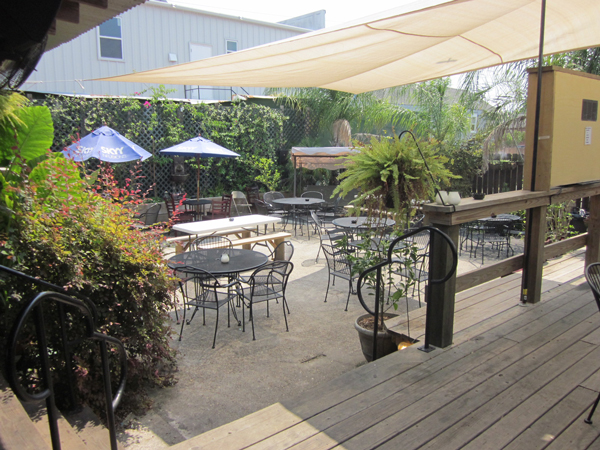 Easy Tiger, For a laid-back drinking experience in the Texas capital, look no further than Easy Tiger. The bake shop and beer garden is best known for its hand-selected assortment of craft beers and cheeses, and also features traditional German fare such as corned beef, sausages, and pretzels. Relax at the bar’s outdoor patio alongside the canal, or cozy up inside with a drink. Taps rotate regularly, but visitors can request a special brand or brew. Make sure to try the bar’s signature beer cheese, which pairs well with one of the homemade Bavarian pretzels. 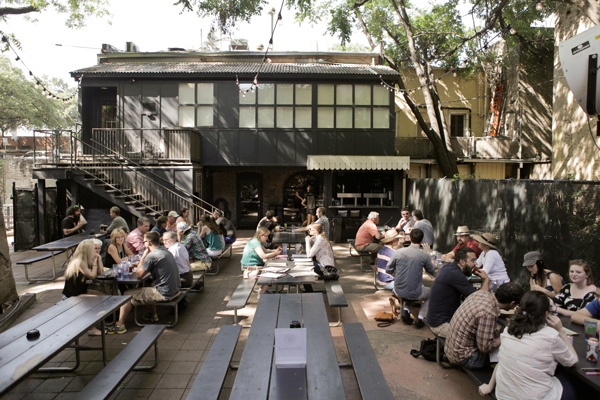 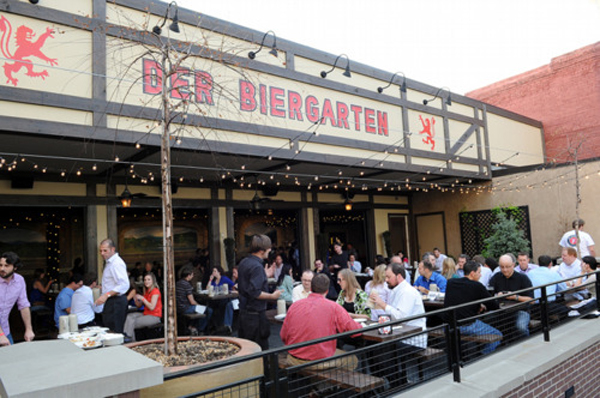 The Standard Biergarten, Located beneath The High Line in New York’s Standard Hotel, The Standard Biergarten is a beer lover’s paradise. The 4,000-square-foot space includes two bars and three ping pong tables, and features a classic German menu with sausages, beers, and oversized pretzels. Enjoy a pint at a high-top table while lounging on pastel-green high chairs, or gather a group at one of the venue’s long picnic tables. During the summer months, the garden transforms into an outdoor oasis, but visitors can still kick back with drinks during the winter in a glass-enclosed space. 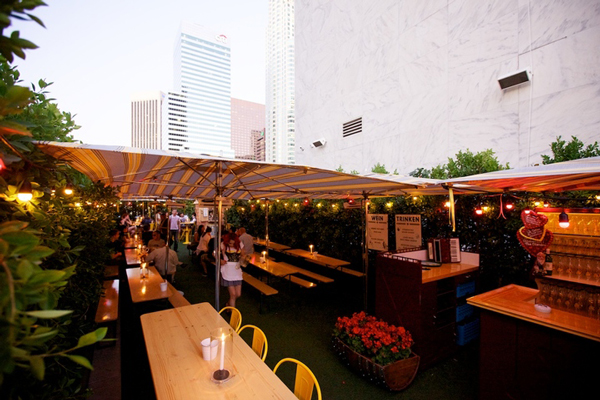 Mecklenburg Gardens, Cincinnati’s Mecklenburg Gardens has survived the test of time, offering residents tastes of authentic German brews for almost 150 years. The beer garden kept its doors open during Prohibition and was recently restored to its full Bavarian glory. Visitors can choose from an unmatched selection of German beers at a central pub area, or enjoy a meal outdoors under shaded awnings with grapevine-covered trellises. With over 15 beers on top and 80 bottled selections, you’ll have no shortage of options. 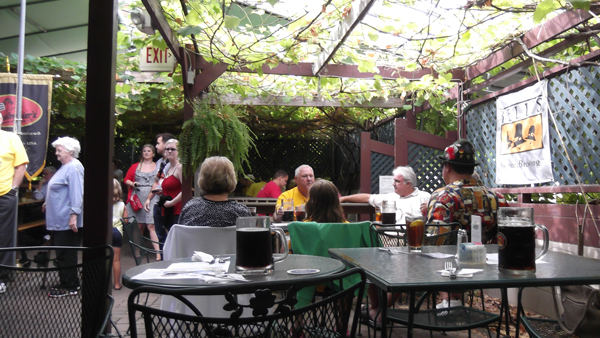 Garden District, Kick back at outdoor tables under Hofbrau umbrellas at Garden District. The D.C. beer garden—formerly known as the Standard—makes the most of its popular 14th Street location, and offers more than just your standard pint of beer. Chow down on smoky pulled pork sandwiches topped with fresh coleslaw, or snack on fresh-made doughnuts on the weekend. Make sure to show up early, as the garden closes when they run out of barbecue. 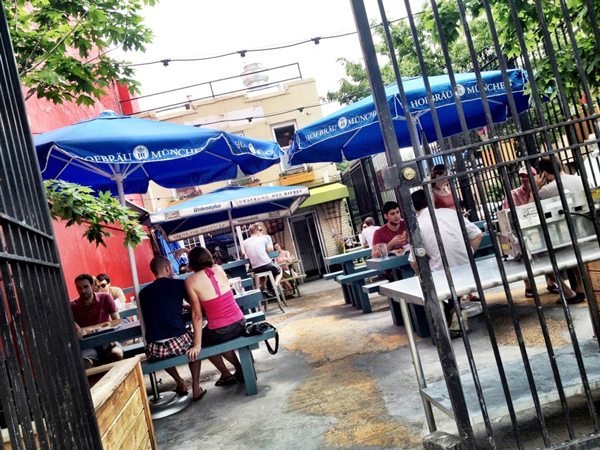