Home
/
Travel Guide
/
Why foodies should always ski in Italy

Alta Badia’s giant slalom course is one of the world’s most testing, with a near vertical drop of half a kilometre. Skiers whizz down these World Cup slopes at breakneck speed and if they get it wrong, it hurts.

Fortunately, convenient excuses abound for those who don’t fancy attempting this run. Firstly, there is the scenery. How are you going to take in the natural delights of Alta Badia – located in the northern province of South Tyrol – if you’re hurtling down the slopes at who knows what speed?

The vistas here are epic; while the Alps point smoothly towards the heavens, the craggy, limestone peaks of the Dolomites resemble the teeth of a prehistoric creature. They look even more spectacular at sunrise or sunset, when their colour spectrum ranges from mauve to ochre.

However, the best excuse for not risking life and limb on the giant slalom is the resort’s profusion of gourmet offerings. In fact, it’s a surprise anyone finds time to ski here at all.

Gourmet ski
As Alta Badia has learned, nowadays it’s not enough just to be a winter sports resort; you need that something extra, particularly if you’re a small fish. While Andorra has its duty-free and Ischgl its big-name concerts, Alta Badia’s unique selling point is its gourmet cuisine.

Indeed South Tyrol boasts no fewer than 20 Michelin-rated restaurants – more than any other region in Italy. These eateries have inspired other hotels and restaurants in the area to raise their game and now good food is easy to come by; at the charming Hotel Antines, a short walk from the main cable car, I quaff a delicious five-course dinner that could wow even the most discerning foodie. It’s a world away from the stodgy ski fare that seems acceptable in other resorts.

Alta Badia has become such a foodie hotspot that every January, 1,000 of the world’s finest chefs descend on the resort for a cook and ski competition know as the Chef’s Cup.

And if you want the real Michelin experience, you can do it on a budget; mid-December marks the start of Gourmet Ski Safari, a season-long series of foodie events. I tried it and for €50 you can ski to six lodges where Michelin-starred chefs present you with various gourmet dishes and a glass of wine.

The event is popular with local foodies, but catching on internationally. Those with more modest budgets can opt for a cheaper ski and eat option (without the Michelin stars), known as Slope Food, which is available throughout the season.

Vintage flair
Alta’s culinary offerings are matched only by the local wine, and in nearby Corvara you can taste your way through various vintages. For here you will find Hotel La Perla, which is home to one of Italy’s top five cellars and contains almost 30,000 bottles of wine.

During a tour of the hotel, we head to a room deep in the building known as the Temple of Sassicaia, a Masonic-style homage to one of the world’s greatest Cabernet Sauvignons. Kneeling at the altar of this shrine, a panel slowly opens to reveal what I’m told is an extremely rare bottle. Shrouded in white light, this vintage has a price tag to rival a new family car. If that’s a bit rich for your blood, you could buy a newer vintage for a mere €170.

The wine snobs in my group nearly fall over with excitement, while I stand mildly puzzled. Happily, this hotel is not just for wine connoisseurs; the well-stocked bar upstairs serves classic cocktails, bar snacks and rock music.

La Perla offers another surprise upstairs with a room dedicated to Pinarello, the Italian cycle manufacturer. Cycling is huge in South Tyrol and La Perla’s display includes Sir Bradley Wiggins’ bike – not just any, but the one he rode on the final stage of his Tour de France victory. Guests can hire a similar one, worth around €10,000, for just €35 a day.

Skiing in Alta Badia
Despite the daunting giant slalom, Alta appeals largely to beginners and intermediates; there is little off-piste skiing and black runs are few and far between. That said, some of the reds are testing. 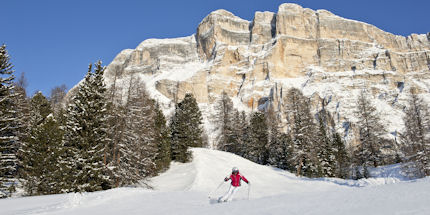 The vast majority of runs are wide blues and there is enough to keep skiers of that level happy for a week. Meanwhile, beginners can test their growing confidence on terrain that will flatter their abilities. For the more experienced, the resort is a gateway to the Sella Ronda, the circular 42km (26-mile) trail that any intermediate can complete in a day with a sense of achievement.

As for après-ski, Alta’s nightlife isn’t buzzing. However, dinner up the mountain at Club Mortizino is a definite highlight for me. Not only is the food fantastic but the journey home is a thrill – shunning the more sensible option of a lift in the Snowcat, I opt to ski back down the mountain in the dark.

The following morning, I’m back on the slopes and riding with a driver in one of the resort’s piste basher, which are priming the runs for the day ahead. It drops me off at the Las Vegas Lodge, where I eat a simple breakfast and watch the sunrise over limestone peaks.

Its arrival casts light on the freshly groomed pistes and, looking at the smooth runs, I vow to work hard today – if I don’t, Alta Badia’s Michelin stars may turn me into the Michelin Man.

Slope Food: Each participating lodge offers one appetizer created by a Michelin-starred chef plus a glass of wine for €12. The Slope Food card allows you to visit three huts for €30.